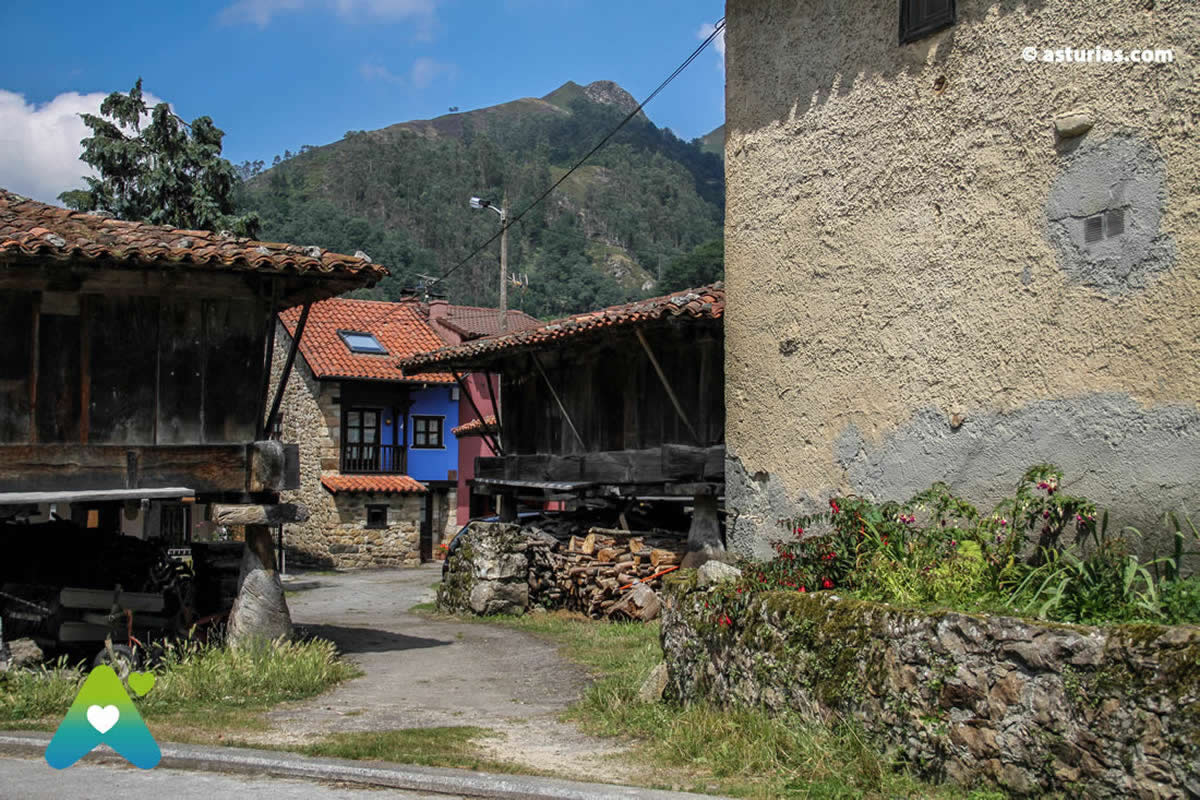 The rural area of ​​Espinaréu (in the council of Piloña), is quite a living treasure of other times. Its antiquity is attested mainly by the granaries that proliferate in each corner. These agrarian constructions are an ancient ingenuity that served to store harvests and slaughtering meat and put food sustenance safely. That's why they were built on high, supported on four pillars or pegoyos, to avoid humidity and achieve the precise temperature, preventing at the same time that rodents or vermin would end up with stocks.

The granaries were part of the Asturian landscape due to the inevitable human adaptation to a hostile and humid environment. If you visit Asturias you will see that the granaries exist. They abound, more or less. However, in most cases they exist as a mere exception, scattered and with low density. In some rural areas this exception is not even observed. On the other hand, being exceptional, they usually survive dilapidated and sterile, and in many cases they hardly fulfill any other role than that of sheltering tools, vehicles, or cars of the country under their structure.

What is an Asturian granary? What is it for?

Based on seeing hórreo after hórreo we understand that the villages were territories full of life and ingenuity, and we confirm with the sight that in this village the highest concentration of hórreos of all the Eastern zone of Asturias.

The granaries currently serve other needs, or none in particular. Only on the outside can it be seen that they still fulfill the function for which they were created, and it is not uncommon to see them adorned with onions, garlic and other less perishable products from the garden. In this sense, current fridges and freezers have relegated the granary to an almost romantic role.

In EspinaréuAs if time had not passed, these constructions seem to want to tell us that they are still alive. Not surprisingly, they have reason to be haughty, because in this town are the oldest buildings of this type in Asturias. If we wish, we will have the opportunity to see one inside, taking into account that all granaries have an owner and are locked, so to access them it is necessary to ask for permission. 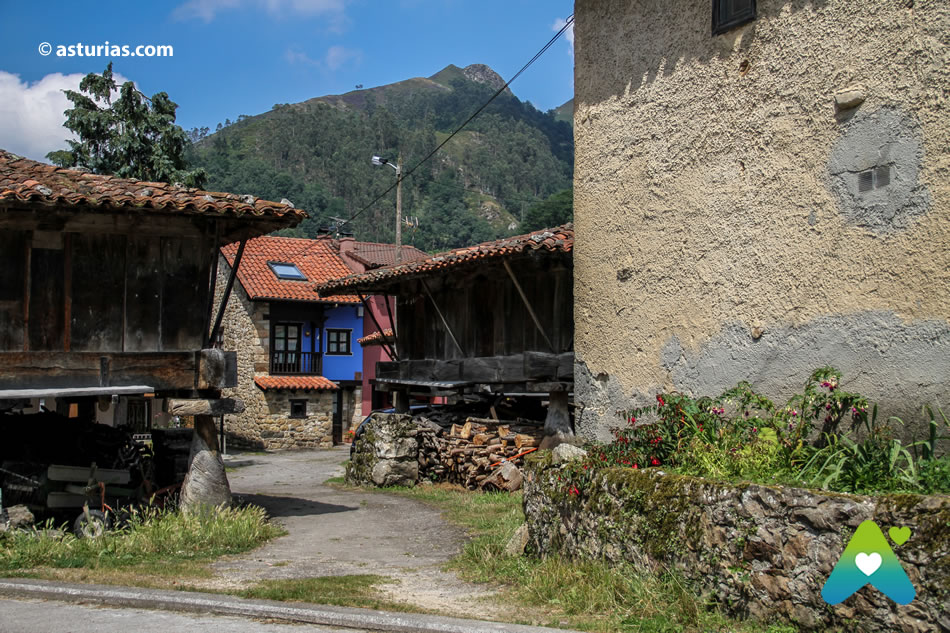 The granaries of Espinaréu, as in the rest of Asturias, also have a mystical essence, or superstitious if you prefer. The ethnographic heritage of the village is rounded off with the mystical-magical signs inscribed on its tablets. Persuasive elements, in many cases to ward off evil spirits, of basically Celtic origin that were originally drawn or carved in forests and caves. These symbols coexist with other merely ornamental and commemorative ones that are the marks of the carpenter-builder, and with a good number of messages and generational slogans subject to the interpretation and analysis of the most curious.

In Espinaréu granaries and breadbashes coexistThe latter are very similar to the former but with a greater capacity, with six pegoyos instead of four, a corridor, a balustrade and a greater number of ornaments. Both types of constructions they were made mainly of chestnut wood and their pieces were joined without a single nail, using wedges of the wood itself to assemble them. 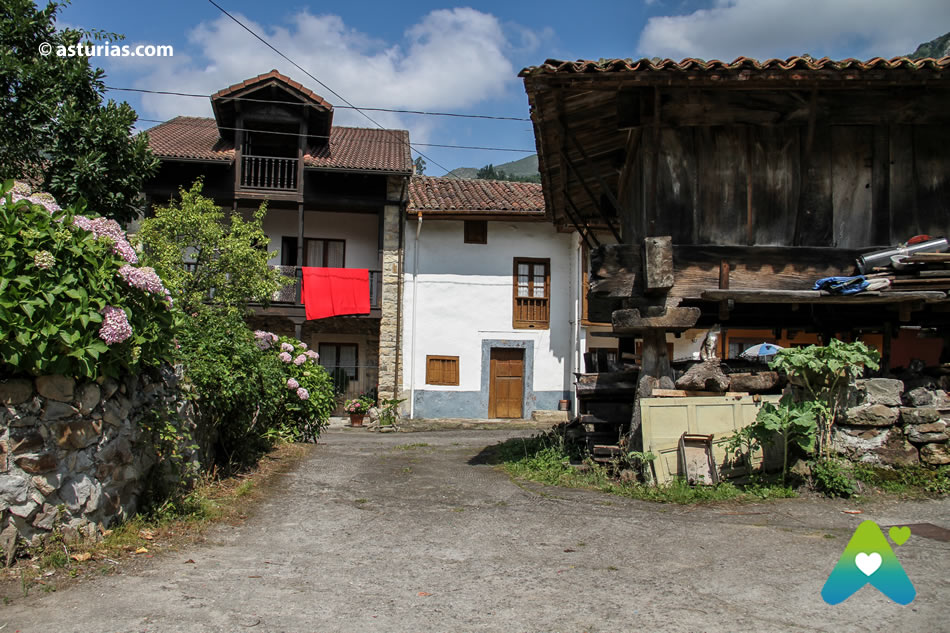 It is known that granaries and breadbaskets were vital in a farm and that many times, at least the bread baskets, they were part of the bride's trousseau. Going back further in time we discover that they have an uncertain origin. There are those who maintain that the large wooden crates carried on wheels to the Roman camps in the imperial conquest campaigns, predecessors of the current caravans, were frequently abandoned and used by the locals, who placed them on supports to use them as storage.

Etymologically, the word hórreo comes from the Latin horreum, which designated a building in which fruits of the…

Espinaréu is a good mobile to know the essence of the Asturian countryside, but it is also a magnificent environment to further admire its landscape. The proximity of the mountain and indigenous forests allow hiking as in few places. It is also a very appropriate place for horse riding and mountain biking. The territory is crossed by the Espinaréu and Sotu rivers. In its surroundings we find panels that indicate the routes. Just three kilometers from the rural center, along the winding road that leads to Riofabar, we discover two excellent places to rest: the recreational area of ​​La Pesanca and the Arboreto de Miera, located on the banks of the Infierno River and inscribed between the Sierra de Aves and La Giblaniella. An enclave fortunate in natural resources, with one of the most extensive spots of beech, oak and chestnut trees of all Asturias.

to 0,44 km Casa Espinareu is a century-old rural house, with a rustic style, restored in 1999, in stone and wood, and recently remodeled. It has a kitchen ...

to 3,18 km Single-family house, located 700 m. altitude in the highest part of the village of Ligüeria, belonging to the Parish of Sellón (Council of Piloña). ...

to 5,11 km In the Cueva de El Sidrón, some 2500 remains have been carefully and carefully analyzed since 2000, following the “Clean Excavation...

to 5,13 km On the first Sunday in October, the town of Infiesto pays tribute to those hazelnuts that a few centuries ago left for the continent piled up and ...

to 5,18 km The council has two cataloged and protected areas: the Sierra del Sueve and the Cueva del Sidrón Partial Nature Reserve, the latter also ...

Hunting and fishing in Asturias