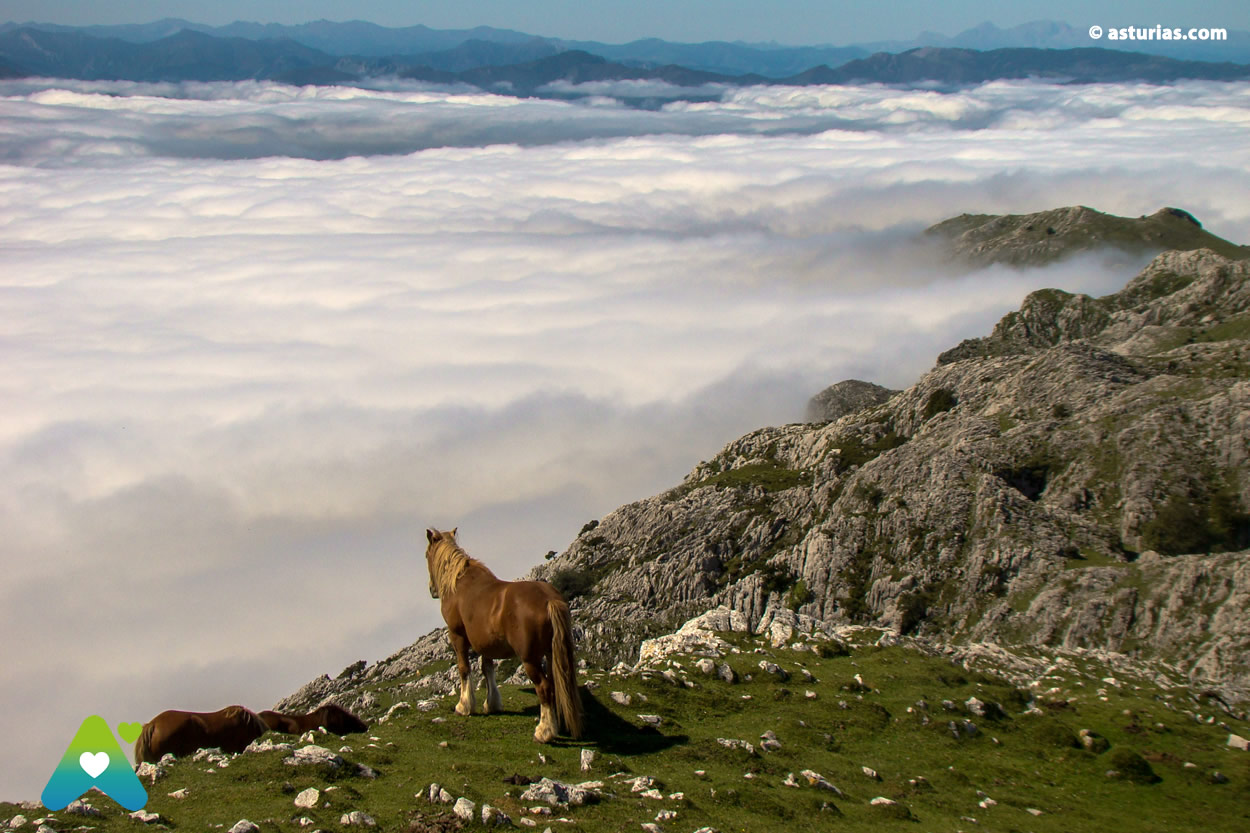 We have prepared a list for you with 10 places that we recommend you visit in Asturias, in which there are monuments and places of interest, beautiful, typical and picturesque towns, interesting corners ... well-known places or places outside the tourist circuits. Places throughout the Asturian geography, coastal and inland. We hope you like them.

These 10 corners are interesting places that are worth a visit if you are in Asturias, yes, they are not in order of importance or relevance, more lists could be made because choosing only 10 corners of the Asturian geography is very complicated. We hope you like them and if you miss a special place let us know.

1 · Holy Chamber of the Cathedral of Oviedo

Inside the cathedral of Oviedo there is a corner that stands out above the rest: the Holy Chamber, an architectural remains of the primitive construction that stood on the site, which is both a treasure of Romanesque sculpture and of the sacred relics of the kingdom astur. The Cathedral of El Salvador stands on the same site as an old pre-Romanesque cathedral from the XNUMXth century (at the time of Alfonso II) which in a certain way conditioned the structure of the Gothic work. So in the Holy Chamber is the first or last redoubt of the temple, depending on how you look at it.

The Holy Chamber is a space with two floors. The lower one is the original pre-Romanesque, while the upper one is Romanesque, from the XNUMXth century. It is a vaulted space in which the twelve Apostles were sculpted, paired two by two, on the columns that support the arches.

Not many years ago, the facade of the Cathedral of Oviedo appeared to us dark, superficially charred by the effect of…

The Asturian castros are more than two hundred and fifty in the Principality. The best preserved, and the one that has borne the most archaeological fruit to date, is that of Coaña. It is thought that between 1.500 and 2.000 people lived there.

The size of the constructions, whether they are houses, warehouses, workshops... varies between 4 and 6 meters in diameter for the circular ones, and 5 x 12 meters for the rectangular ones. What is most striking is the area known as the "sacred enclosure" where there are two groups of buildings, one older than the other, related, presumably, to the cult of water.

In a small trough adjoining the castro is the didactic classroom of the Archaeological Park of the Navia Basin, whose contents are about the castreña culture, the Roman gold mining and the archaeological method.

The castreña culture belongs to the Iron Age, a hard, warlike period, full of insecurity. The Asturian forts, towns…

A set of three waterfalls that are staggered in a few meters, marking out the course of the Acebo River that runs between rocks and numerous wells.. They are in the network of protected areas of Asturias.
The waterfall of the Firbia, the most accessible and impressive of the three, is surrounded by oaks, birches and chestnuts and on its right margin there is a canal that in ancient times supplied several mills.

To reach one of the most impressive natural spectacles of Asturias we will only have to walk an hour, half an hour to…

Covadonga and its surroundings are one of the cardinal points of Asturias. A sacred and beautiful latitude to which the faithful, tourists and mountain lovers come. There rests the image of the beloved Santina.

It constitutes a natural gateway to the National Park of the Picos de Europa. Only 12 km, ascending through a narrow and steep road, you reach the beautiful sites where the Lakes of Enol and La Ercina: The Lakes of Covadonga.

Covadonga and its surroundings is one of the cardinal points of Asturias. A sacred and beautiful latitude to which…

It is a small chapel in Cadavedo. It is in a really spectacular place on top of the cliffs of La Punta del Cuernu, with privileged views over the coast. From here you can see Cadavedo beach, within the Protected Landscape of the Western Coast. The chapel was built in 1931 and since then it has become a place of pilgrimage every summer.

Cadavedo already boasts of being an Exemplary Town of Asturias 2022 officially. This area of ​​western Asturian geography is made up of…

The beach of Cobijeru is coquettish and small, it survives next to meadows and farmland, and connects with the sea through a crack of several tens of meters. Protected natural area where we can enjoy rare plant species, such as Zostera noltii, included in the Regional Catalog of Endangered Species of Flora, as well as Carex distans, Salicornia dolichostachya and S. fragilis, due to their rarity and location punctual in Asturias.

The sea allows few whims, because its behavior is always subject to the designs of gravity and…

It is the northernmost point of Asturias. Farther north impossible.
Geographically, Cabo Peñas is located in the central area of ​​the Asturian coast, between Gijón and Avilés, in the municipality of Gozón.
It is a protected area, mainly at a biological level due to its importance as a habitat for seabirds and other migratory species. Here are also all varieties of heather in the region, as well as relevant geological formations.

The own Space of the Cabo Peñas collects mainly cliffs and beaches with valuable dune systems, emphasizing from west to east: the sand of Xagó, the beach of Portezuelos, the one of Verdicio, the one of Ferrero, the one of Llumeres or the one of Bañugues. It also includes the islet of La Erbosa, the largest of the Asturian coastline after the island of Deva.

Any place on Earth is determined by two numbers, its latitude and its longitude. The numbers of Cabo Peñas ...

It is a cardinal point of the Bronze Age in Asturias: an uncertain monolith in a flat and earthy mountain range. The central engraving that is exposed in this surprising limestone is the abstract image of an individual: the supposed idol, more than a meter high and with a geometric outline. It has deep strokes and color pigments, as does the weapon, possibly a sword, found next to the idol. There are a good number of burial mounds in the area, in the closest surroundings of the flat mountain range of La Borbolla and its neighboring plateaus.

The Idol of Peña You

The idol of Peña Tú, tattooed forever on a mysterious rock that has always provoked religious sentiment,…

The Dobra River is one of the most vertical in the Asturian orography. It is born on the Leonese slope of the Picos de Europa and ends its journey giving way to the Sella. Getting there is a full-fledged excursion, suitable for all ages, with just half an hour or 45 minutes of travel.

The Dobra river conserves crystalline waters among other reasons because it is exempt from all types of pollution, not having any human settlement in its watershed. Between June and September they are at their best for bathing.

We propose here an affordable, simple route, without great slopes, but no less attractive than others or less ...

Puerto de Vega is 7,5 kilometers east of the capital of Navia, twists and turns and labyrinths that form its streets and alleys. There are barely 2.000 residents but they are determined to preserve their history and urban planning. And that citizen conscience It has been awarded the “Exemplary Town of Asturias” award, which Prince Felipe gives each year and which Puerto de Vega was entitled to in 1995.

The coquettish fishing fleet rests in a picturesque port with an enclosed wall, battlements in perfect condition that stopped piracy in the Middle Ages and that protected the town against the French invasion three centuries later.

to 0,01 km With regard to religious celebrations, Avilés takes the cake and adds seven brotherhoods with their respective processional steps that go through ...

Visit to the tower of the Cathedral

to 0,02 km The temple began to be built at the beginning of the XNUMXth century on the ruins of pre-Romanesque and Romanesque basilicas, and thanks to the relics cons...

to 0,03 km Now, with the beginning of the new millennium and the thorough cleaning of the cathedral surface, its rejuvenated appearance shows more clearly its magnificent ...

to 0,04 km It is worth coating a couple of steaks with ham and cheese inside it does not seem very original. But in Asturias they turn it into slow food, into pleasure, into a ...

to 0,04 km Its preparation is typical of the Carnival festivities although it is a dessert that can be found at any time of the year and in almost all the confectioneries ...

The most beautiful villages in Spain